Postcard from the Sidelines 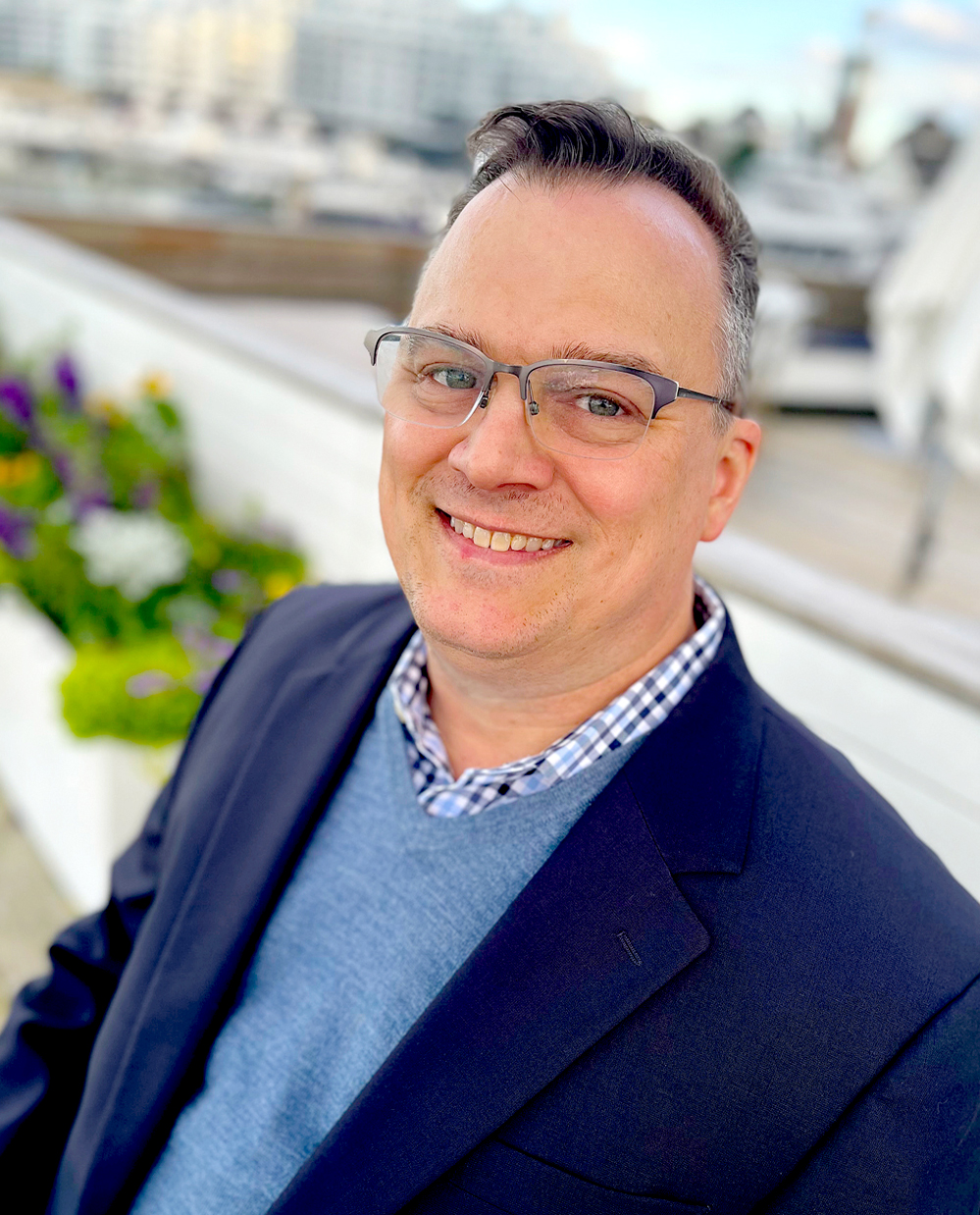 MICHAEL ROGGOW ’87 described himself as a quiet, sensitive kid, interested in music — often hired by neighbors to tend their gardens, mow their lawns, and look after their homes while they were away. Roggow was attracted to writing and the arts, and to stories of people from other walks of life. Yet, other boys his age often didn’t share his interests.

“I lived on the periphery in the 1980s. Back then, I was a young man learning about authenticity and coming to terms with being gay. I was turned off by the conservatism that defined that period because I felt it disregarded large swaths of people. Instead, I advocated for counterculture and human rights, a left-leaning stance vested in my personal experience, and a by-product of feeling relegated to being an outsider in my earlier years,” Roggow says.

Roggow earned his degree at Corning Community College in 1987 and later attended Ohio State University. After college, he moved to New York City, where he earned a doctorate at New York University and worked for 20 years managing academic programs and teaching psychology at the City University of New York.

“Living in New York and working in public education transformed me,” he said. “I came into my own while living there, in the company of friends and colleagues who were strong advocates for human rights and social responsibility.”

Living on the Fringe

Roggow traveled to China to research and write about the role of vocational education as an engine to fuel China’s burgeoning industrial and technological economies. While conducting research, he became interested in the experiences of Chinese citizens who lived on a fringe of their own and sought integration and advancement by migrating from China’s rural Western provinces to its wealthier neighbors in the East. Their stories of formidable challenge piqued his interest, as they somewhat paralleled his own.

“There was a time when I thought the fringe was the worst place to hang out,” Roggow said. “When we’re not encouraged to participate, we are often forced to listen and observe. I witnessed — I was on the outside looking in. Nobody tells us this, but that is a good place to be. It is often from there that we develop curiosity, empathy, and respect for others. We ask better questions. We think more expansively. We become attuned to the needs of others, and we often make better decisions about things that really matter.”

During his academic career, Roggow secured $4 million in grant funding to help first-generation and minority college students complete a college degree. He published articles in academic journals underscoring the urgency for college students to develop greater understanding of global and cultural issues, and he appealed to academic leaders to work in concert to improve student learning.

The Diversity Center is a Lighthouse

“One important feature of Corning Community College is The Diversity Center,” he said. “It is a lighthouse that signals to students that the college is their home, that difference is valued, and that safety and support are available. This matters, because the Diversity Center helps create a safe place for students, and this feeling of safety helps them achieve success.”

Roggow is dean of Business and Technology at Massasoit Community College in the Boston area. He is currently working on a project at the London School of Economics focused on managing bias in critical decision-making.

Statement from Dr. William Mullaney on the Celebration of Pride Month (June 2021): 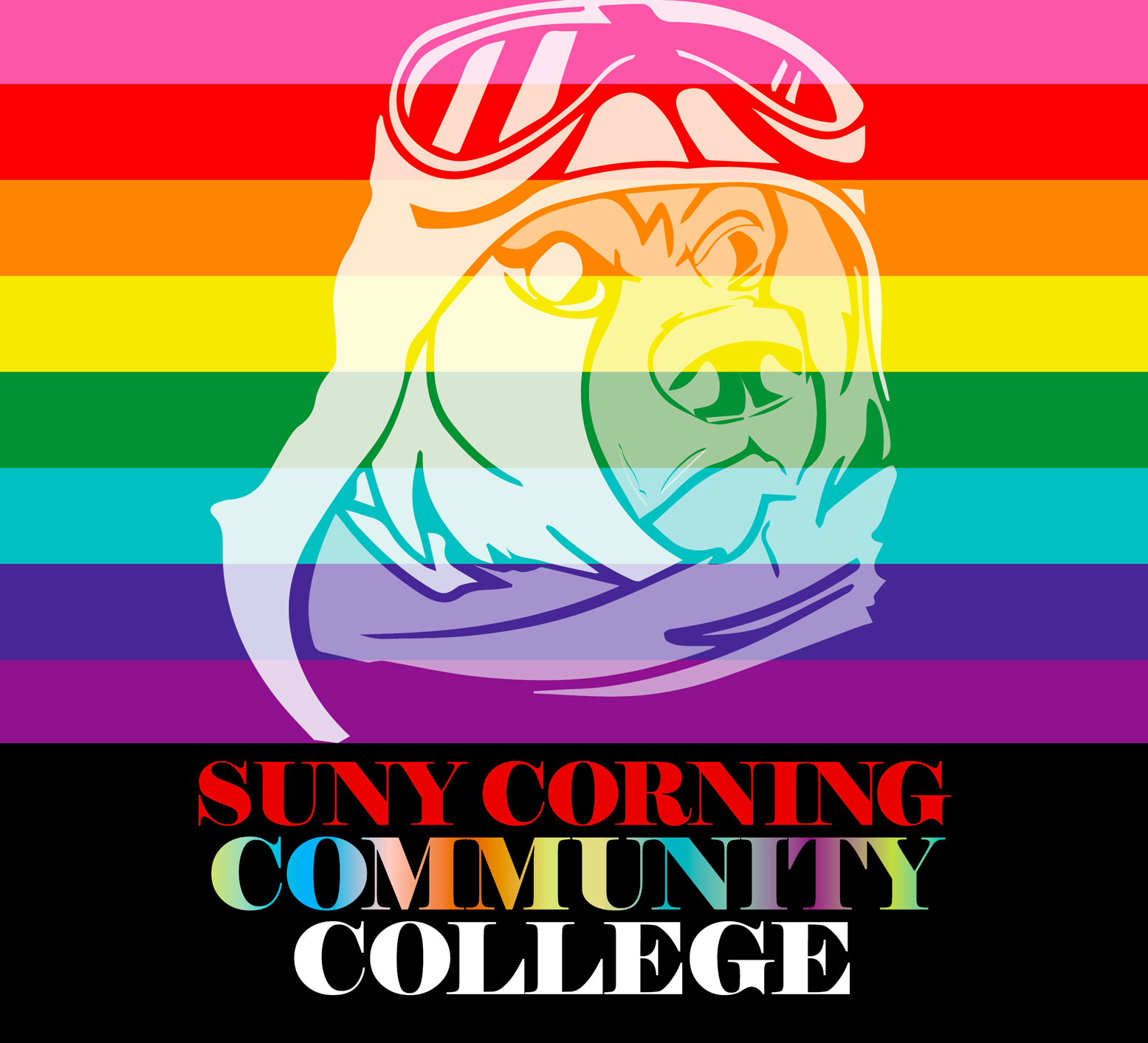 Please join me, and the SUNY Corning Community College family, in celebrating International Pride Month. Pride Month honors the Stonewall Uprising in New York City on June 28, 1969, when police stormed the Stonewall Inn, a gay club in Greenwich Village, leading to six days of protests and clashes. This event is considered the catalyst for the gay rights movement in the United States.

As the world emerges from the COVID pandemic, I can’t help but recall the 1980s and early 1990s when our country was experiencing the worst of the HIV/AIDS pandemic, which continues to this day in Europe, Asia, Africa and the Middle East. Scientific advances since then, such as development of antiretroviral drugs, have enabled people with access to treatment to live long and healthy lives with HIV, but I cannot forget the fear, loss and death that dominated that period. However, coming of age during that time also taught me a great deal about resilience, acceptance and love.

I am proud to work at a place where diversity is one of our core values – and it is this commitment to diversity that makes the College such a vibrant place to study and work. We celebrate and honor our diversity every day of the year, but in June, during International Pride Month, we strive to bring greater awareness to LGBTQIA+ rights and the power that is in all of us.

Pride recognizes the on-going fight for equality and justice that everyone deserves and offers us an opportunity to reflect on what all of us – this great diverse group of individuals –  can do to create a welcoming and accessible environment for everyone. Diversity is strength, diversity is power. We all draw from each other’s uniqueness and that helps us to grow as a society.

At SUNY CCC –  we’re Pride – and we’re Proud. Join the CCC community as we celebrate diversity, encourage inclusivity, and promote awareness on issues that affect the LGBTQIA+ community.

My name is Michael Roggow, and I am an alumnus of Corning Community College (AS., Business Administration, 1987). I am writing to you after reading the notes you included on your college webpage. You acknowledge International Pride Month through your comments about the Stonewall Uprising of 1969, and the devastation created by homophobia and the HIV/AIDS pandemic in the 1980s.

I greatly appreciate that you are so supportive of diversity by acknowledging LGBTQ movements, and that you convey these values on the college’s webpages. I doubt many community college presidents have the inclination or would take the time as you did to write about something so important and that may heighten others’ collective consciousness. I feel much better about resuming my financial and service contributions to the College knowing these are part of your core principles.

Attending Corning Community College was memorable to me. As a young closeted gay man, I experienced trauma after being bullied in middle and high school in Corning. The College in the mid-1980s proved to be a good place for me to regain my academic and social confidence, albeit limited diversity and widespread fear of AIDS. The Corning area at that time was a difficult place for me (or any gay person) to come into my own, especially as Steuben and Chemung counties were very conservative during those years. Yet the environment at the College was academically exciting as I received great instruction. While I don’t know any of the faculty who work there now, I still feel a unique connection to the College.

In closing, I wholeheartedly thank you for your leadership. There is no substitute for your words of support for movements like Pride, for your referencing the Stonewall riots of 1969, and for memorializing the widespread fear, loss and death of gay men in the 1980s.

You can count on my support, both for the College and for you.