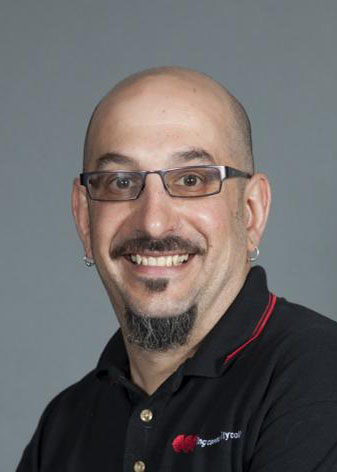 Professor DeLeone holds a B.S. and M.S. in Electrical and Computer Engineering from Clarkson University.  He has been teaching in both the Physics Department and Information Technology Department since 1993.  He was one of the co-creators of the original Computer Repair Technology program at CCC, which is now called Information Technology: Computers and Networking.  Joe has been working with computers since the late '70s when he was a youngster and taught himself assembly and soldering skills so he could build an Altair 8800 (which, of course, he wishes he still owned).

Joe has participated in numerous conferences in the Information Technology field, giving seminars on topics such as virus and spyware detection and protection, computer security, and networking.  He also owned and operated a successful Information Technology consulting business for 5 years.  Recently, he became a Cisco Certified Instructor for the Cisco Academy Introduction to Networks course.

Currently, Professor DeLeone teaches numerous courses at CCC in areas such as Physics, Operating Systems, System Configuration, and Cisco Networking.  He is also oversees the Information Technology Practicum, a course where students work as interns for 100 hours in local businesses and school districts.  He is also an Investigator for a National Science Foundation Grant on Information Security, partnering with Rochester Institute of Technology.

Joe's hobbies and interests include hanging out with his two sons (who regularly pwn him on the XBOX) and his wife, fishing at the lake, and working on all things technology related.  He spends a lot of time volunteering at Notre Dame High School where he tutors in the study skills room and assists the band directors.