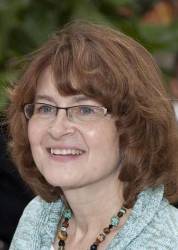 Mary Guzzy is a Professor of Humanities and Theatre at CCC, an actor, playwright and director. At CCC, she teaches theatre performance courses, is the academic adviser to Muse of Fire Theatre, and supervises or directs all CCC theatre productions.

In 2009, Guzzy initiated the annual participation of CCC students and faculty in the Kennedy Center American College Theatre Festival. This week-long festival showcasing the best of college theatre in our region, is hosted at a major university. It immerses students in workshops, productions, readings, and scholarship competitions in performing and technical theatre arts.

Most recently, Guzzy wrote and directed Clara. Based on the life of Clara Schumann, it is her second one-woman show for Ventfort Hall: The Museum of the Gilded Age in Lenox, Massachusetts. Recent plays produced include Future 86, freely adapted from Ibsen's An Enemy of the People, Lonesome Drum: An American Tale, and The Color of War, based on the Civil War letters of Robert Gould Shaw to his wife, which is regularly performed in Massachusetts.

Other recent projects Guzzy directed include A Midsummer Night’s Dream, Blithe Spirit, The Threepenny Opera, Sylvia, Camelot, Is He Dead?, Tintypes, and The Sleeper. Most recent acting roles include ‘Mrs. Webb’ in Our Town in the annual Radio Dramas at Elmira Little Theatre, ‘Jessie’ in ‘Night Mother, 'Amanda' in The Glass Menagerie, directed by Normi Noel, and 'Paulina' in Death and the Maiden, directed by James B. Nicola.

At CCC, Guzzy has developed an Actors’ / Playwrights' Honors Course to encourage student playwriting, and recently completed a two-year international online collaboration in the teaching of voice and movement with Linda Nicholls-Gidley of Sydney, Australia. The project is sponsored by the SUNY Global Center of the State University of New York system.

As the artist/manager at Shakespeare & Company, Lenox MA from 1999-2003, Guzzy served as Director of the Rose Playhouse U.S.A. project, created the Bankside Humanities series of cultural lectures on aspects of the Renaissance, and performed in The Scarlet Letter, Ethan Frome, Chekhov's The Celebration, and her one-woman portrayal of 'Moll Cutpurse,' Just a Simple Roaring Girl. Additionally, Guzzy co-founded and led Industrial Arts Theatre in Denver, Colorado.

Guzzy has participated in the Association for Theatre in Higher Education Leadership Institute, and is a member of the Two-Year College Focus Group within ATHE. She holds a Bachelor's in Theatre from Illinois State University, and a Masters in Humanities from the University of Colorado/Denver.