D.R. Lasseter ’17: Overcoming Adversity and Overachieving in the Arts 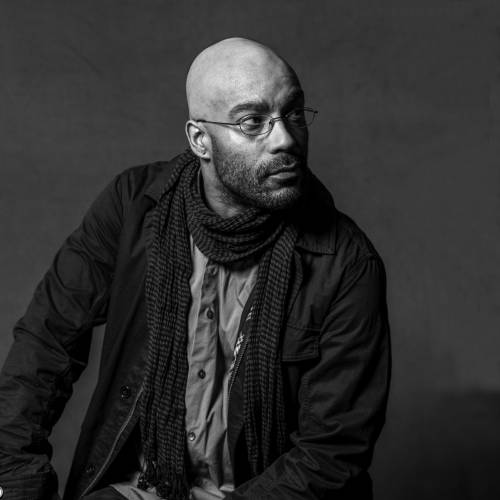 Anxiety. Fear of failure. Fear of the unknown. For some, those uncertainties can have a crippling effect on growth and one’s willingness to try something new. For D.R. Lasseter ’17, anxiety certainly played a factor when contemplating his future – but thanks to a promise to his mother, he was able to overcome adversity and achieve his goals.

In his late 20s, D.R. Lasseter was working as a model in New York City when he received devastating news that his mother was diagnosed with breast cancer. D.R., an only child whose mother was his only real family, ended his modeling career and packed his bags to move to Baltimore, Maryland, to be with her during that challenging time. Unfortunately, his mother lost her battle with cancer, but before she passed, she made D.R. promise her that he would obtain a college degree.

After uprooting from the Big Apple, D.R. was left to figure out what to do with his life. He had made a commitment to receive a college education, but with no family and no real place to call home, finding a new home to begin the next chapter of his life proved to be a daunting task.

In hopes of moving back to New York, D.R. reconnected with two of his close friends from New York City, only to find out that one had moved to Ithaca, New York, and the other had relocated to Elmira, New York. So, in 2012, D.R. decided to leave Maryland and join his friends in the Southern Tier. He ended up landing a job and settling in Corning, New York.

Back to School
Three years passed with D.R. working and living in Corning, before he decided to make good on the promise he made to his mother. So, D.R. enrolled at SUNY Corning Community College in pursuit of an Associates degree in art and design.

“Being a non-traditional, it was sometimes challenging to be around peers that were so much younger than me,” said D.R. “But, in a lot of ways, it made me a leader, because I was more mature, had those life experiences that my peers didn’t have. When we were in group projects, I was often asked to be the leader of the group. So I think being older ended up being a positive thing in the long run.”

The anxiety of being a non-traditional student quickly dissipated as D.R. began to immerse himself into his art. Somewhat of a generalist, he dove into all types of art – from oil paintings to typography, D.R. had the opportunity at CCC to explore various mediums and gain a well-rounded, holistic education in the arts.

CCC Faculty Encouragement
Exceptional skill and a hard work ethic did not go unnoticed during his time at CCC. Former art professor David Higgins saw D.R.’s potential, and with commencement quickly approaching, the CCC faculty member pushed him to continue his education.

“Professor Higgins was a huge influence on me, artistically,” said D.R. “He encouraged me to apply at the University at Buffalo and Buffalo State. He just said, ‘see what happens, you’re a really good student and artist, and I think you’d do great.’ That encouraged me to go on to bigger and better things.”

Upon graduating from CCC in 2017, D.R. applied to and was accepted into the University at Buffalo, where he eventually earned a Bachelor of Arts in Fine/Studio Art in 2019. With two college degrees in hand, D.R. had certainly followed through on his promise to his mother. However, he still felt there was more to accomplish.

D.R.’s mother had earned a master’s degree prior to her passing – she was the only person in his family to achieve that level of education. So, in honor of his mother, D.R. decided to continue to better himself through higher education and enrolled at Georgia State University in 2019 in pursuit of a master’s degree. Despite the adversity faced due to the COVID-19 pandemic, D.R. went on to receive a Master of Arts degree in 2021, achieving the same level of education as his mother.

“So I am here just honoring the promise I made to my mom,” said D.R. “She got a master’s degree, so I just wanted to take it a step further and continue that path and trajectory.”

A Master and Future Doctor
This is generally where the story ends. This is where D.R. is supposed to bask in what he accomplished and move onto using his master’s degree in the workforce. But D.R. isn’t like everyone else – he overachieves.

D.R. is enrolled in Kennesaw State University’s graduate program and is in pursuit of a Master of Arts in Art and Design (MAAD) with a concentration in museum studies. He is putting his education to work as he spends his days assisting in curating at the Atlanta Contemporary Art Center, one of the Southeast’s leading contemporary art centers. Upon completion of his master’s work, D.R. plans to re-enroll at Georgia State to obtain a PhD.

Advice for Adult Learners
So, what advice does D.R. have to those who may have delayed their college education and are contemplating whether or not to obtain higher education? Well, his advice is simple yet familiar, but it is nonetheless powerful: Just Do It.

“Not to rip off Nike’s slogan, but I think a lot of times when you challenge yourself and you do something that you don’t think you’re capable of, or nervous, or scared, or whatever the mental block is, if you can just do it, you’ll be surprised how many doors will open for you,” said D.R. “Opportunities will unfold in front of you. Friendships, networking, and all of these other great things came out of my telling my mom I’d go to school.

“I never thought in a million years I’d be in Atlanta working on my PhD. You never know what will happen when you just believe in yourself and just do it. Fear can be really debilitating and I think it stops a lot of people from pursuing things in their lives because they’re afraid of rejection or afraid of not accomplishing something or making a mistake, but the only way that you can move forward and achieve great things is by not being afraid of the risk, not being afraid of making mistakes because you can learn a lot from those mistakes and become a better person in the process.”