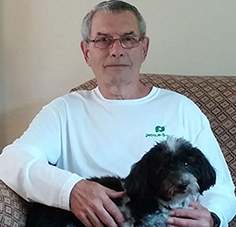 Arnold (Arnie) Gissin discovered CCC while looking at a college publication in the library aboard the USS Forrestal. He enlisted in the U.S. Navy in the 1950s, directly after graduating high school in Rochester, where he was ranked number 367 in a class of 400.

Arnie chose the service because he considered himself too unmotivated to attend college. But, after traveling to four continents and 16 or so countries during his enlistment, Arnie reevaluated his goals and decided to apply to Corning Community College in 1960.

Although he wasn’t a great student in high school, Arnie began earning Cs in all of his CCC courses in his first semester.

“I learned more in that first semester at Corning Community College than I had my four years prior,” Arnie said. “I got excited about learning.”

At the Rockefeller Institute Arnie was selected for a public administration internship with Albany’s Department of Social Services, which then began his successful 9-year career as the Rochester Area Director for the New York Department of Health. Following his term with the DSS, Arnie went on to become the President and CEO for the retirement community at the Jewish Home of Rochester, and a single course instructor at the Rochester Institute of Technology. He retired from working in 2002.

“I attribute my successes to CCC because it gave me the base that I never would have had. … What Corning did for me and for a lot of others is give us a chance. It gave me the support I needed to show me I could do it. I wouldn’t be where I am without it. It absolutely changed my life,” Arnie said.

The now 77-year-old loves playing pickleball at the YMCA in Rochester and spending time with his wife, Mary Jane, his two children, Steve and Mindy, his step-children, Marty and Philip, and his 10 grandchildren.

Arnie enjoys traveling in his free time, too.

Among his travels, Arnie never forgets to generously donate each year to Corning Community College as a thank you for changing his life.

When asked why he donates to CCC annually, since 1996, Arnie said, “Corning Community College has offered me a life and a career I would not have had otherwise, and I know it continuously does that for others. … I owe CCC for a start that has allowed me to enjoy a very nice life.”